Cerritos, Calif. – August 12, 2013 – Calnetix Technologies, a pioneer in high-speed permanent magnet motor generators, power electronics and magnetic bearings for a variety of applications and industries, passed the first of stringent shock and vibration test requirements for its motor and magnetic bearing technology, which are an integral part of a new generation of shipboard chillers for the U.S. Navy.

“The testing is the first step in proving our capabilities in meeting the Navy’s aggressive performance, reliability and environmental goals,” said Vatche Artinian, Co-Founder and Chief Executive Officer of Calnetix Technologies. “This project advances and highlights our expertise with the demanding requirements of a naval combatant to meet severe vibration of all-weather operation and weapons affect shock.” 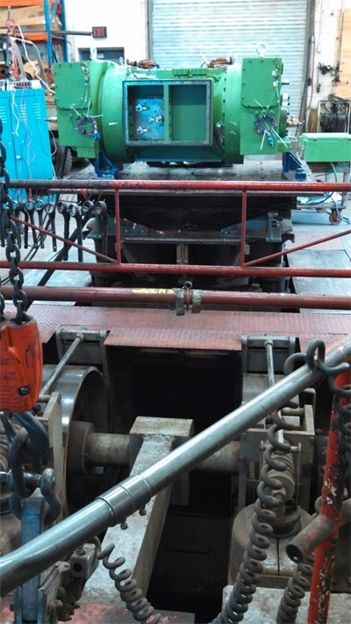 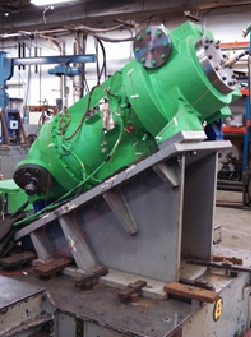 The compressor was tested for its ability to meet Navy MIL-STD-167 vibration and MIL-S-901D shock testing requirements. The compressor was placed on a shaker platform driven at sinusoidal frequencies from 4 to 33Hz at up to 1.5Gs. The excitation was applied in the radial direction and axial direction both separately and simultaneously. The measured rotor motion correlated well with Calnetix computational models at all tested frequencies, amplitudes and orientations. Additionally, the Calnetix patented magnetic bearing design proved successful in securing the rotor while deleviated, allowing the U.S. Navy at-sea options.


All testing to-date verifies that Calnetix will be an integral part of the U.S. Navy meeting its aggressive goals to reduce ship acquisition and life cycle costs by increasing cooling capacity by at least 50 percent, reducing chiller fuel consumption by greater than 25 percent, improving reliability by more than 50 percent, all while meeting the environmental objectives of reducing refrigerant leakage by 90 percent and eliminating hazardous oily waste.For shock testing, the machine was exposed to a graduated series of shock loads ending with a pulse exceeding 50Gs. Post-test magnetic bearing system operation was normal as expected. The auxiliary bearings, specially designed to carry the shock load, met all expectations.

According to YORK® Navy Systems, the construction of production chiller units is expected to commence in 2014 with the first ship installation in 2016. The first production chiller will undergo MIL-STD-167 vibration and MIL-S-901 heavy weight shock testing in 2015.

Calnetix Technologies, LLC (“Calnetix”), headquartered in Cerritos, CA, is focused on Innovation That Drives Industries. The company specializes in high-performance, high-speed motor generators and best-in-class advanced magnetic bearings and control systems. Calnetix’s patented, underlying technologies, which have been in use since the company’s inception in 1998, have made Calnetix a world leader in the design and production of high-speed machines. The company’s overall technology portfolio and system integration capabilities have led to development and production contracts with industry leaders and the start of many successful subsidiaries that focus on unique niche markets. For more information, please visit www.calnetix.com.