Active Magnetic Bearings (AMBs) have been in commercial rotating machinery for over 30 years. These are the most advanced active magnetic bearings in the market that offer increased performance to extend machine lifespan. Calnetix’s Powerflux™ active magnetic bearings require no lubrication, operate frictionless and have no wearable parts, thereby helping optimize system efficiency and enhance reliability. There has been an industry-wide increase in the production of magnetic bearing systems, which has led to cost reduction. Calnetix enables cost reduction by improving manufacturing processes of our magnetic bearing components and further optimizing our controllers, which are a substantial percentage of the overall system cost.

Calnetix Technologies specializes in high-speed rotating machinery supported by patented active permanent magnet bias homopolar bearings. We have developed numerous magnetic bearing systems used in a wide variety of commercial systems. This includes high-efficiency blowers, high-speed compressors, Organic Rankine Cycle (ORC) systems, and many more. We offer Powerflux™ Magnetic Bearings in radial and side by side combination configuration. These are the most advanced active magnetic bearings in the market. The very unique advantages of Calnetix’s magnetic bearings include the following:

Using permanent magnets to generate the steady portion of the magnetic field (bias magnetic field) results in less variation of the force exerted on the rotor when it deviates from the nominal position than when an electrical coil is used for the same purpose. This results in an improved magnetic bearing dynamics and larger load capacity when the rotor is offset from the central position. There are additional packaging and layout benefits as well. The size of a modern rare-earth magnet needed to produce the bias magnetic field is a small fraction of the size of an electromagnetic coil needed to produce the same magnetic field. This can be understood given that an electromagnetic coil needs a certain number of Ampere-turns to generate a particular magnetic field. If the size of a given coil is reduced, the Ampere-turns must remain constant, which inevitably leads to an increase in total resistive power dissipation in the electromagnetic coil, and even more to an increase in resistive power dissipation in a unit volume of the coil. Thus, the lower limit on bias coil size is driven by the heat dissipation available to prevent coil burn out. The smaller size of permanent magnets compared to current-carrying coils result in smaller overall size of a magnetic bearing, leading to a more compact machine design and improved rotordynamic performance.

Combining Radial and Axial Bearing Functions in One Device 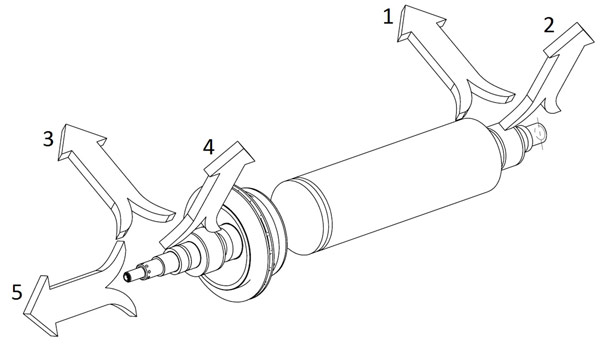 In most cases, Calnetix utilizes broad multidisciplinary in-house expertise to work with a customer to design an entire machine on magnetic bearings rather than simply supplying magnetic bearing components. This achieves optimal performance of the machine as an integrated system and fully realizes the magnetic bearing system potential. This approach is made possible due to a wide range of Calnetix in-house areas of expertise including mechanical, electromagnetic, rotordynamic, thermal and electronic design and analysis. Over the course of numerous machine development programs, Calnetix has refined its proprietary design and optimization codes to allow quick generation of optimized magnetic bearing geometries. These proprietary tools use a combination of analytical solutions and both in-house and third-party FEA modules. Such codes greatly facilitate development with faster and fewer iterations at the machine level leading to the optimal design of a machine as a whole.

Calnetix developed a novel Graphical User Interface (GUI) to give both users and specialists an intuitive way to work with the inherent benefits of a magnetic bearing system. Over the span of many years this GUI has been continuously refined and upgraded based on feedback from both internal and external customers. The GUI provides insight into all aspects of magnetic bearing and machine performance. It is the platform for system setup, monitoring and diagnostics: 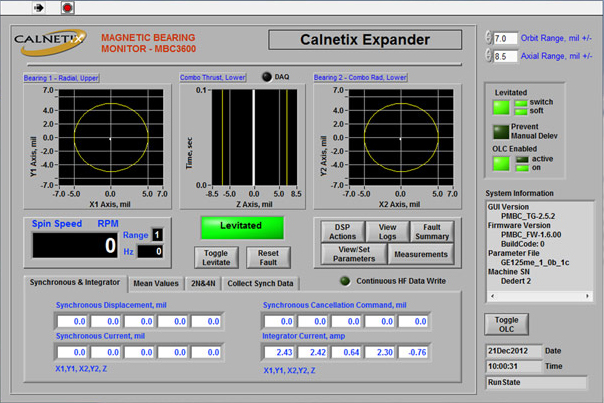