Magnetic Bearings are devices used to support (levitate) objects using magnetic forces. Some magnetic bearings provide a full non-contact support of an object, whereas others provide only a partial support working together with more conventional mechanical bearings.

While a wide variety of magnetic bearings have been developed, only one type has been widely accepted in the industry so far - Active Magnetic Bearings (AMBs). This is because an active magnetic bearing can exert higher-density forces on surfaces of supported objects than any other type of magnetic bearing. They can also operate in a wide range of environments and their properties can be made highly configurable through software parameters. Ongoing dramatic improvements in Digital Signal Processors (DSP) – faster performance, integration of important peripheral features, and cost reductions – have further boosted commercial attractiveness of active magnetic bearings. 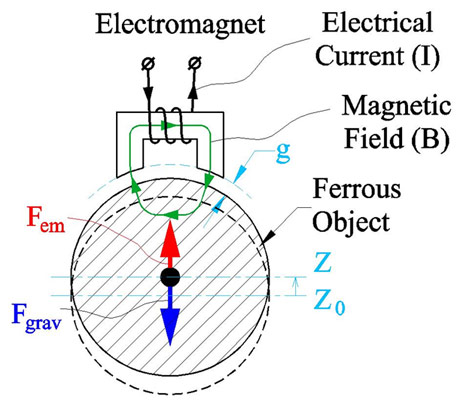 The pulling force exerted by the electromagnet on the object depends on two parameters:

Click the links to learn more about additional topics:

Position Control in a Magnetic Bearing